This week at BP Boston I took another look at the Statcast Barrels metric, but this time I focused on pitching. Batters want to get the barrel of their bat to the ball, pitchers don’t want them to do that. In 2016, the Red Sox pitching staff was pretty good at avoiding opponents’ barrels, which likely contributed to them being a top-10 group (as ranked by ERA).

Head to BP Boston to read the article: Barreled Balls and Preventative Pitching

I suggested the title be The Red Sox’s Dry Agents as an allusion to prohibition era police who broke barrels of booze, but both of my editors correctly recognized that this was too esoteric and not likely to draw traffic to the site.

One of the most interesting things to come from my research for this article was that unlike the situation for the batters, the year-to-year correlation for barrels-against (i.e., the pitching side of things) was quite low. This suggests that a pitcher’s ability to avoid having opponents hit them hard varies considerably, which seems to fit with the ideas of defense independent pitching (DIPS) and batting average on balls in play (BABIP). You can see the difference between batter and pitcher year-to-year correlations in the plot below: 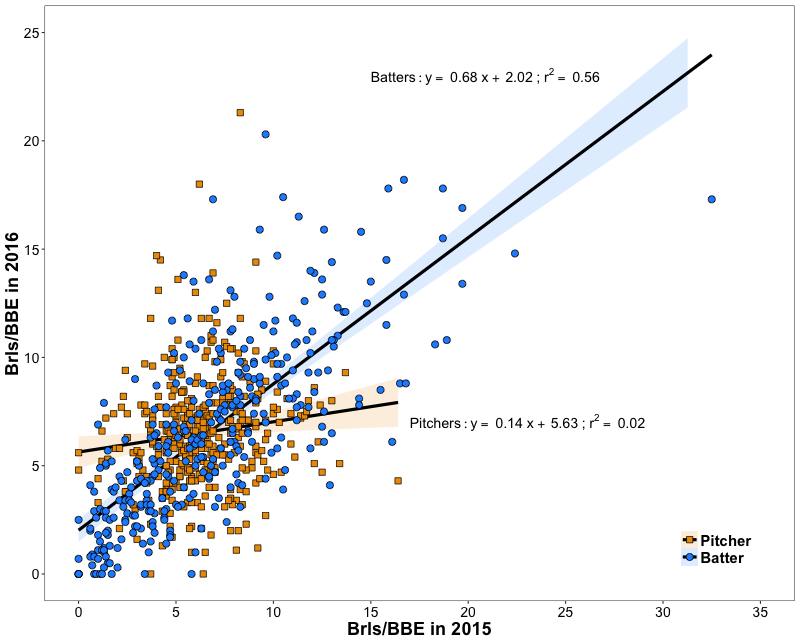 You can also look at the per plate appearance measure Brls/PA.

Getting another season’s worth of data will help us to understand how much of this barrels metric is signal and how much is noise.