Ian Nepomniachtchi was prescient. He said that wins in this World Chess Championship would come as a result of mistakes and that has certainly been the case. Unfortunately for Nepo the mistakes have been his and he trails Magnus Carlsen by three points with only four games to play; almost certainly an insurmountable deficit.

The first win came in Game 6. The game started similarly to Game 2 but small deviations had the players thinking. Around move 30, still 10 moves from the first time control (and addition of 60 minutes to the clock), Carlsen had only three minutes remaining on his clock while Nepo had 23 minutes. By move 35 Nepo was also under three minutes. This time pressure clearly affected the players’ accuracy, as there were wild swings in advantage, back-and-forth, up to move 40 where the Stockfish engine saw the game as back to level:

Pawn advantage units are on the y-axis (from -5.0 to +5.0), converted to be displayed with reference to the player. Moves are on the x-axis, with the key time control moments indicated. The players each get 120 minutes for their first 40 moves. After they complete 40 moves they get 60 minutes added to their clock. After they reach 60 moves, another 15 minutes is added, with an increment of 30 seconds per move starting on move 61.

In Game 6, from move 40 onward, Magnus grinded his slight advantage until on move 130 Nepo erred enough in the placement of his Queen to ensure the first decisive result of the match. According to the computer, on move 134 Carlsen had a forced checkmate in 18 moves.

The action (and mistakes) that took place when time pressure crept into the match was possible confirmatory evidence for those calling for changes to the format of the championship. The run of draws in championship matches that was broken by game six has been taken as evidence that the players are too accurate when they have so much time to think about their moves and recall the lines they explored with the help of incredible supercomputers. It is true that player accuracy has increased over time but does that necessitate a change to the format? I am not sure. Regardless, one of the top suggestions, one that seems to have the support of Magnus Carlsen, is to adjust the time control. This could include starting the players with less time on their clock, adding fewer minutes once they have reached a certain move number, or both. Doing so would limit how long players have to think about their moves and the increased speed of play would result in lower accuracy, more decisive results, and greater intrigue for the public. Time control is one change that could be made but there are others. For example, running the world championship in a format closer to the Candidates tournament where more players are involved could work to reduce the instances of seeing the same two players agreeing to a draw. I think an even simpler change is to adjust the relative values of a win and draw. Currently, a win is worth 1 point and a draw is worth 0.5. Increasing the value of a win to 2 points could incentivize players to be more aggressive and be less happy settling for a draw. A downside of this approach could be more reluctance to accept a draw in a clearly drawn position, resulting in longer games that still end in a draw. The fix, if even needed, will not be simple.

Game 6 of the 2021 Championship was grueling. 136 moves. 7 hours 47 minutes long. Both players looked and acknowledged being tired after the game. Because of this, some expected that both Games 7 and 8 would be straightforward draws and a chance to regroup during the rest day after Game 8. This approach makes some sense but is risky for Nepo as he would be down a point in the match and have only six games available to get square. Game 7 was played according to this idea, with a quick, uneventful 41-move draw. Game 8 did not follow suit. Nepo blundered a pawn on move 21, struggled to calm himself after the error, made a few more (relatively) inaccurate moves, and found himself down two points in the match heading into the rest day. 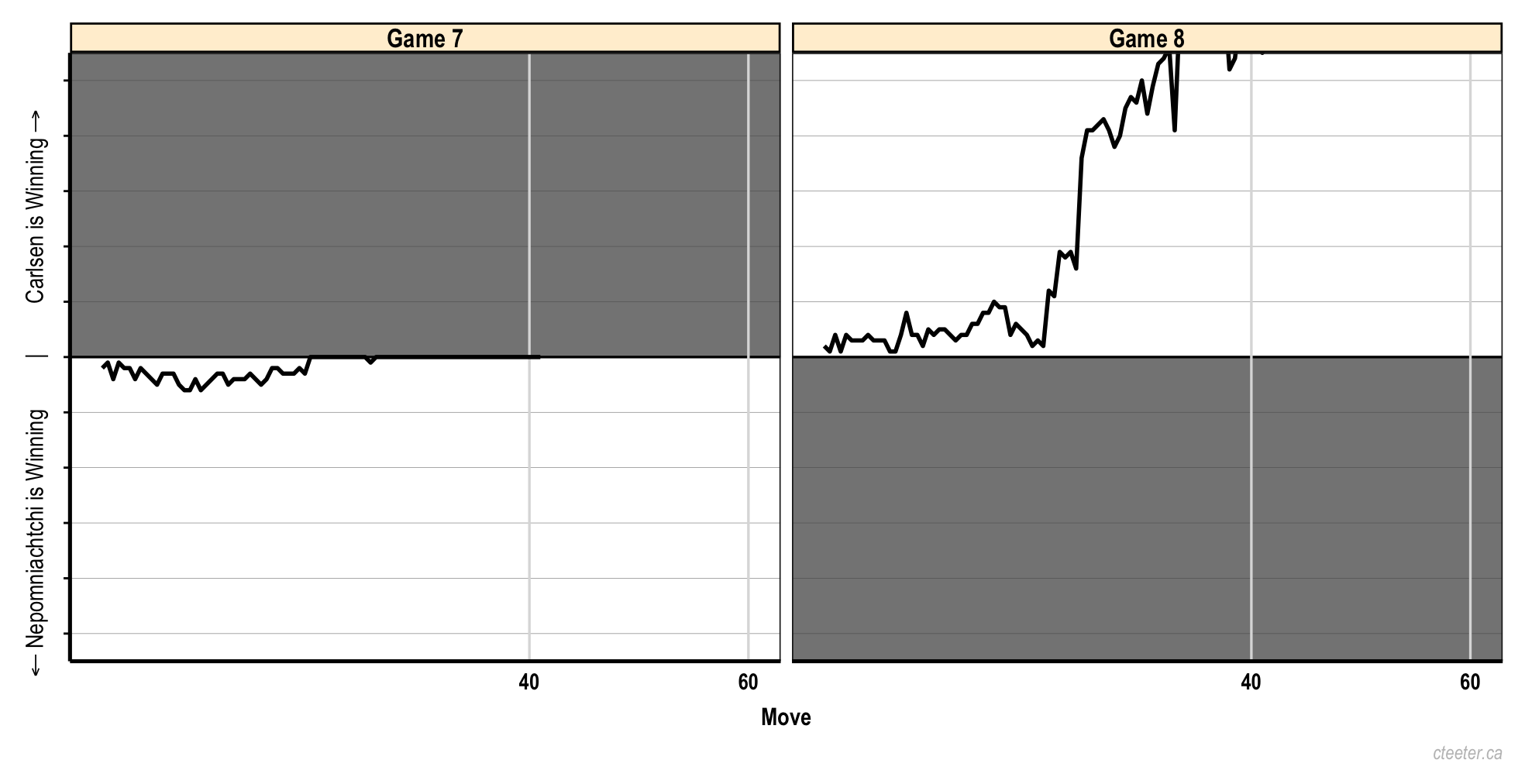 Nepo arrived for Game 9 with a new hairstyle but the chess worked out much the same as in 8: a blunder-induced loss. On his 27th move of Game 9, Nepo moved his c-pawn forward a square and in so doing ensured his bishop would remain trapped and be captured. It is the sort of move that even a chess schlub like me should be able to spot and avoid. Nepo didn’t see it and Magnus was shocked at his good fortune. At that point the game was lost and Nepo’s chances of winning the match were essentially gone too. The uneventful draw in G10 left Nepo with very little margin for error in the remaining games; he has to win three of four just to push things to tiebreaks. 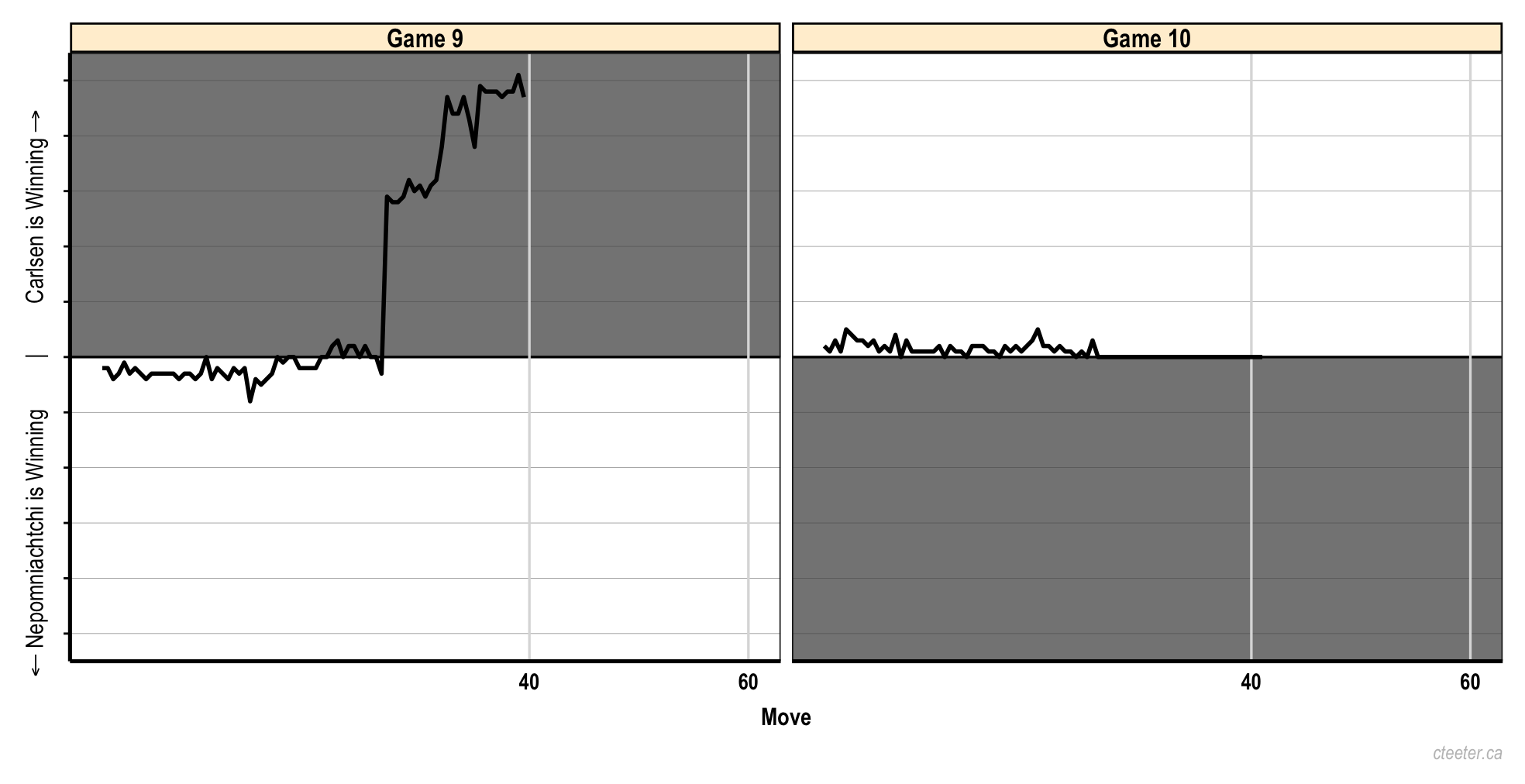 I have focused on the poor moves in these games that have led to Magnus’ three wins but it is important to reiterate how accurate/close the games have been. The players have made XXX moves, looking at the Stockfish engine’s evaluation after each move shows that the majority of moves have resulted in almost no advantage for either player (less than a quarter pawn). It has been extremely difficult for either player to gain a solid advantage. But when advantages have presented themselves, Carlsen has pounced and pushed things decidedly in his favour, with the exception of the time-pressure flurry of moves in Game 6. 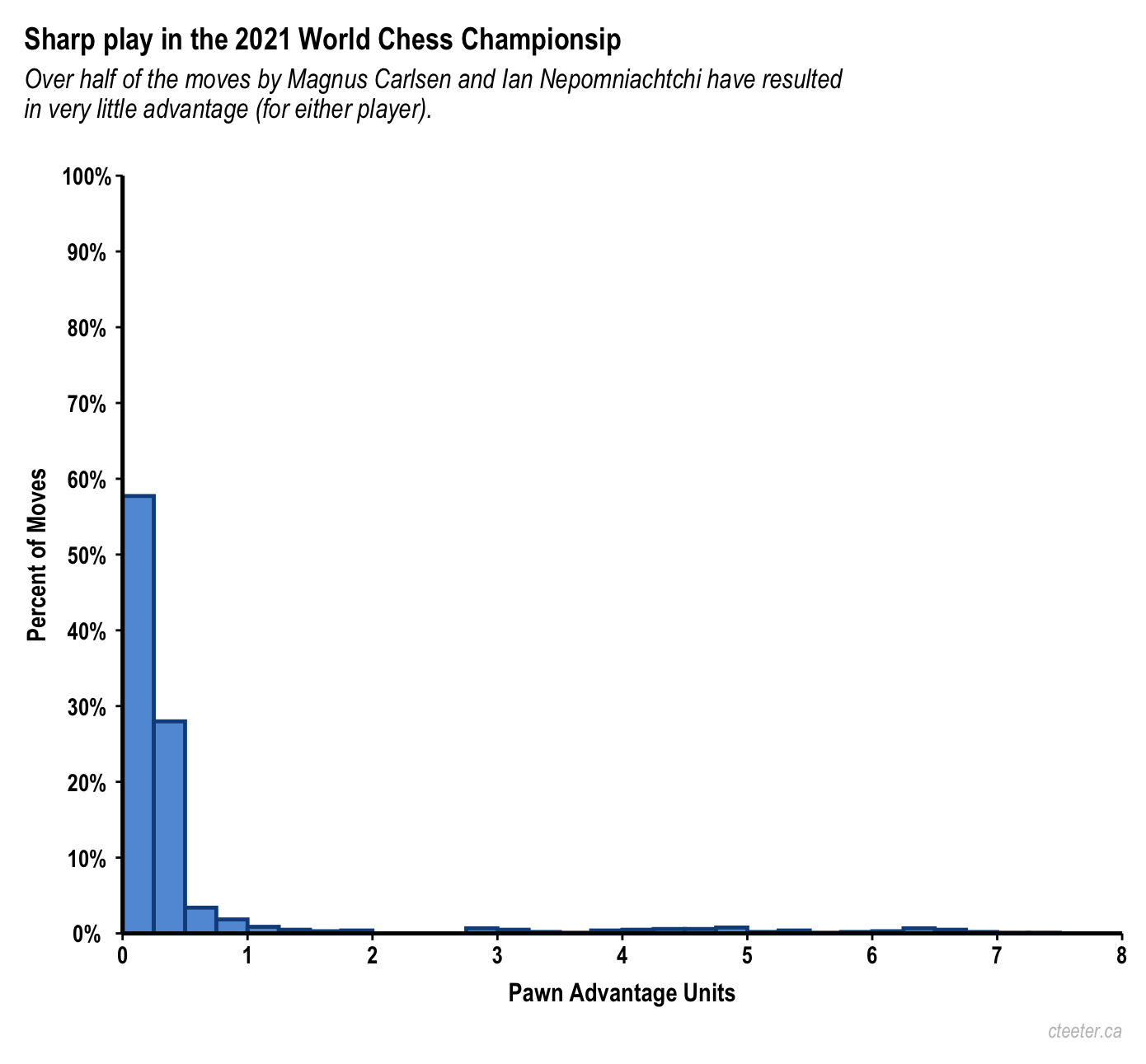 There remain four games to play in the 2021 Championship but barring something miraculous the outcome of this match is settled. Magnus Carlsen has again successfully defended his title and in the process cemented his status as one of, if not the best chess player of all time. He is truly incredible. In two years another challenger will try to knock him off his throne.