Baseball, like much of the rest of society, seems to be in a bad spot right now. Just look at this list of ongoing issues:

It has been ugly out there. And yet, amidst all of that, I still love the game. Those warts are terrible and need attention, but I still love the game and will (probably) keep watching. It is a part of my life. As evidence: I do these silly picks and predictions articles every year for an audience that as best as I can tell only includes me. But I write them up and will (probably) keep doing so in some form because I enjoy engaging with and writing about the game.

After all that bleakness, here is what the title of this post promised: a review of how I fared with my preseason picks for the playoff teams, pennant winners, World Series champion, and major award winners.

As a reminder, here are my picks from April:

And, here is what actually happened:

There were certainly some surprises this year. The Twins won 101 games! It turns out that Cleveland totally punting on the offseason was a bad idea. And now they are talking about trading the face of their franchise, Fransisco Lindor. This offseason could be a turning point for the Clevelanders. How will they go about selling themselves to the fanbase after a Lindor trade?

My predictions were decent. Of the 10 playoff teams, I correctly predicted 7 (3 in the American League, 4 in the National League; continuing the trend of better performance on the NL side I observed last year). The strength of that 7 relies heavily on ignoring the Division Winner/Wild Card winner distinction. I had the Braves and Cardinals as Wild Card winners, and the Nationals as a Division Winner. Those are all absolutely wrong, but they were all playoff teams so technically right. And I wasn’t way off base with that Nationals predication. Outside of a miserable start to the season – the oft-cited 19-31 record in their first 50 games, mostly the result of injuries – they were one of the best teams in the game and ended up as World Series Champions, narrowly beating the Astros (my preseason pick) in a 7-game series, that was about as meh as a 7-game series can be.

My Red Sox just couldn’t ever get out of their own way, struggling all year with occasional fits and starts of success. The run prevention side of the game was their downfall: 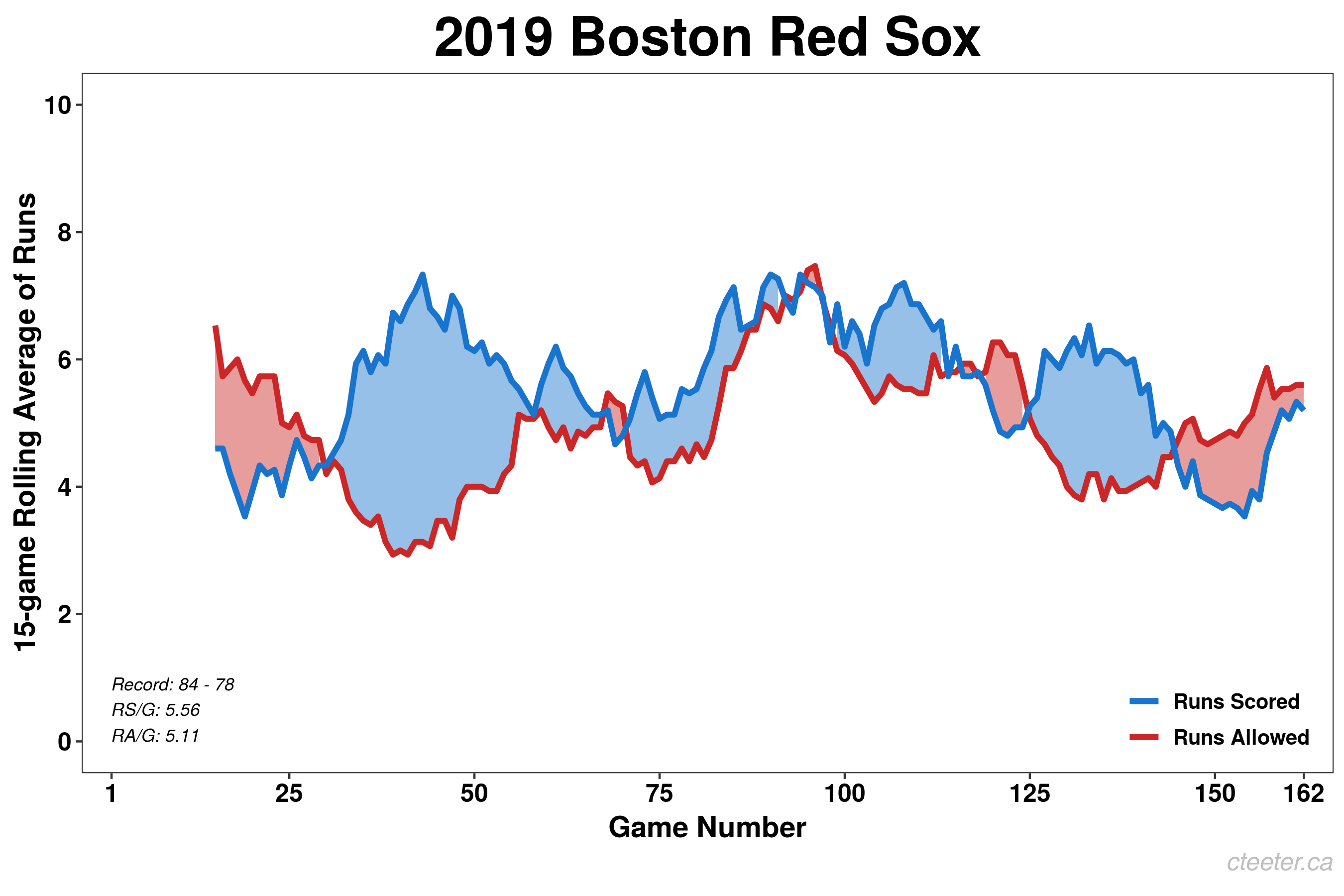 Games 85 through 125 were not pretty for the pitching. A similar story of mediocrity was true on the North Side of Chicago. Both of these teams have fascinating decisions to make this offseason.

As is typically the case, I only got one of my awards picks correct. Here is the breakdown:

I missed on everyone but Trout, but I was close on the other awards. Cole finished second, Jimenez finished fourth, and Cash finished third.

As with the AL, I was close. Acuña Jr. finished 5th and probably would have finished higher had he not missed the last week of the season, which prevented him from completing the fifth ever 40-40 season; Acuña Jr. ended up at 41-37. Scherzer finished third for the Cy Young. We would be talking about Max Scherzer in completely different ways had he not pitched at the same time as Clayton Kershaw and Jacob deGrom. Max has three on his mantle, and finished 5th, 5th, 2nd, and 3rd in the years he didn’t win. Scherzer’s teammate Victor Robles came sixth in NL Rookie of the Year voting, and their manager, Dave Martinez, finished fifth for Manager of the Year.

While I only got one selection correct, my worst pick finished sixth in their category. So I was actually not that terrible this year.

In fact, it can be argued that 2019 was my best effort in making these predictions. The error of each pick can be calculated as: 1 - the rank of my pick within their category. A perfect score would be 0. In the cases where my pick did not receive any votes then they can be assigned a rank of: 1 + the number of players who received votes. Using that approach, I determined the error for each of my picks going back to 2014. Here are the season-by-season results:

In 2014, only 3 of my 8 picks even received votes. On a player-basis, Bryce Harper has crushed me. I picked him to win the NL MVP three times (2014, 2016, and 2018) and he did not garner a single vote in any of those years. By category, I have been best with the AL MVP. My strategy is simple: I pick Mike Trout every year and he finishes in the Top 5 every year. We have a nice thing going. Here are the rest of the results by award:

My low number of correct selections with these awards picks had me wavering in my desire to continue making them, but this error-magnitude way of looking at things is much more forgiving and offers a new benchmark to compare myself against. So I think will keep at it.

Looking forward to seeing what the Red Sox do this offseason (Hint: DON’T TRADE MOOKIE BETTS!) and the 2020 season.